Legal Help for all South Australians

A retaining wall is a structure built to retain a difference in ground level. While a retaining wall can serve as the footing for a fence, the wall itself is not considered to be a fence and is covered by different laws. For information about fences, see our Fences and the Law booklet. The law about retaining walls is principally found under the common law of nuisance, the Development Act 1993 (SA) and the Development Regulations 2008 (SA).

Before any work in relation to a retaining wall is started, two questions must be answered:

When a retaining wall is being built for other purposes, for example, landscaping, or when it is proposed to demolish, remove, repair or alter an existing retaining wall, then development approval from your local council will generally be required. 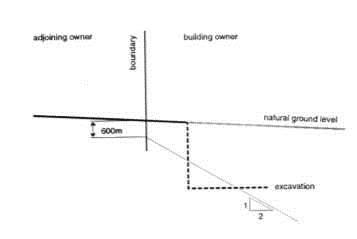 What sort of notice is required?

Notice of the intention to perform the work and the nature of that work must be given to the owner of the adjoining land at least 28 days before commencement of the work [s 60 Development Act 1993]. There is no particular form that must be used to give notice, but it is advisable to provide sufficient detail to assure the neighbouring owner that their land will not be affected by the proposed work. If development approval was also required, then providing the neighbour with information from the development application and approval would usually suffice. If development approval was not needed, it may be worth considering obtaining professional engineering advice, which can then be included in the notice.

What can a neighbour do?

If the neighbour has concerns, they may engage a professional engineer to provide a report, along with plans and specifications, on the need to shore up any excavation or to underpin, stabilize or otherwise strengthen the foundations of any building. The person proposing to do the work must comply with the engineer’s advice. They are also required to pay the reasonable costs of obtaining the report, plans and specifications. Payment can be enforced, if necessary, by application to the Environment, Resources and Development Court.

If the neighbour has requested that work be carried out, as specified by a professional engineer, the person building the wall may be able to obtain some payment from the neighbour towards the work, either by negotiation or by application to the Environment Resources and Development Court. This may occur, for example, when the neighbour will obtain some additional benefit from the performance of the work specified by the engineer.

A land owner who has been served a section 60 notice and believes they need more time to obtain engineering advice should, in the first instance and if possible, discuss the matter with the person proposing to do the building work. If more time is not agreed, the land owner may make an application to the Environment, Resources and Development Court to stop commencement of work until necessary engineering advice has been obtained.

What if notice was not given?

A person who performs work that is treated as affecting the stability of neighbouring land without giving notice, or who fails to carry out engineering work required after serving notice, faces a fine of up to $10 000.

If required notice was not given before work was done, a neighbouring owner may, if necessary, apply to the Environment, Resources and Development Court to have further work done to ensure the stability of their land is not affected.

It is not the role of local councils to check or enforce the service of notice in relation to work that may affect the stability of neighbouring land. However, if a local council has received a development application, which includes a retaining wall that does not itself need approval, the council may attach an advisory notice to its approval, reminding the owner that they should provide notice under s 60.

Before commencing any building work, a further question must be asked: are there any easements or encumbrances noted on the property’s Certificate of Title that could be affected by the proposed retaining wall? If so, and if you need development approval, your application to council must indicate that you have approval to build from the relevant authority or person. If you do not need development approval, you must still obtain the approval of the authority controlling the easement or the person holding the encumbrance before starting work.

Who is responsible to erect a retaining wall?

In Pantalone v Alaouie (1989) 18 NSWLR 119, Giles J considered the law of nuisance and found "withdrawal of support from land is an actionable nuisance for which strict liability attaches without proof of negligence."

Rather than each owner building a separate wall to retain what they have filled or excavated, it is usually more practical and economical to build one retaining wall. It is therefore advisable to discuss your plans with your neighbours.

How is apportionment of cost determined?

Where one party fills and the adjoining owner excavates, each party is liable according to the proportion that the retaining wall supports the fill or excavation. For example, if one neighbour fills 300mm above the natural ground and the adjoining neighbour excavates 700 mm below the natural ground, then the neighbour that fills is responsible for 30% of the cost and the neighbour excavating is liable for 70% of the cost of the 1 metre retaining wall.

The cost apportionment that would apply in example 1 below is as follows:

Example 1: apportionment of costs when there are single retaining walls between properties

What happens when there is an existing retaining wall?

There is an existing retaining wall my neighbour has erected, but I want to level (excavate) on my property (on the other side of the existing neighbour’s retaining wall).

The owner (B) seeking to excavate will be responsible for the cost of the retaining wall to support the excavation they caused and also any costs to ensure that the previous retaining wall erected by the adjoining owner (A) is adequately supported.

However, under the Development Regulations 2008 (SA), the existing fill retaining wall should have been built to allow for some excavation on the adjoining property. If this did not happen and stabilizing work is needed, B may be able to argue that A should contribute to the cost of this work.

Who is responsible to maintain a retaining wall?

Where both parties benefit from the existence of the retaining wall, as in example 1 above, then it is reasonable that both parties will contribute to the maintenance of the retaining wall according to the proportion of the benefit they receive. However, over time and as properties change hands, it can be difficult to know what the gradient of the natural ground level was, who actually altered it, and to what extent. While councils may need to give approval for repairs, it is not the role of councils to determine the proportion of benefit and consequent apportionment of costs.

The duty to minimise damage

Even if it is the responsibility of one owner to repair a retaining wall, if a neighbour is experiencing loss or damage due to a faulty, deteriorating or damaged retaining wall, that neighbour has an obligation to mitigate their damage, or else any claim may fail.

As repairing or altering a retaining wall is classified as development, consideration must be given to whether development approval is needed prior to any work being commenced. Check with your local council. Generally, the principles outlined above under Development approval apply. However, if the repairs are minor, using similar materials and not relating to the stability of the wall, formal approval may not be required.

When a single wall is proposed

Where it is proposed to build a single retaining wall between properties for the benefit of both land owners, then, if the neighbours agree, the wall can straddle the boundary. Costs are apportioned according to the benefit received.

When there are two walls

If there is no agreement between neighbours, or if there is an existing retaining wall, as in examples 2 and 3 above, then a retaining wall must be built solely on the property of the person required to build the wall. It is not only the visible wall that must be on the builder’s property; the footings must also not go into the neighbour’s property.

If a retaining wall has been built on the wrong side of the boundary (this sometimes occurs, for example, when a developer has built adjoining properties), two issues arise: who is responsible to maintain the wall, and encroachment.

Regardless of which side of the boundary the wall is, the owner receiving the benefit of the wall is responsible for maintaining it. In example 4 below, owner B would be responsible for the wall even if it had been built with boundary position 2 (on the neighbour’s property).

Retaining walls come under the Encroachments Act 1944 (SA), and a retaining wall on the wrong side of the boundary is an encroachment. If the footings of the retaining wall go onto the neighbour’s property, this is also an encroachment. The Act provides for the adjustment of boundaries or compensation where walls encroach on adjoining land. Neighbours may negotiate to resolve the issue. If necessary, an application may be made to the Land and Valuation Division of the Supreme Court.

If the proposed retaining wall is on the boundary of council land, for example, the footpath reserve, then the whole wall, including the footings, must be on your land and not on council property.

The Development Act 1993 (SA) allows for emergency orders to be made if an authorized officer of the local council determines there is a threat to safety arising out of the condition of a retaining wall or an excavation. A local council will usually only consider making an emergency order in extreme cases. Further, if there is any uncertainty about whose responsibility the work is, a council would normally serve notice on both land owners, as it is not the role of councils to decide whose responsibility it is to perform the work.

An order may require the building owner:

An owner can appeal the order within 14 days after the order is received by them or longer if granted an extension by the court.

The following disputes are dealt with in the Magistrates Court (Minor Civil Action jurisdiction), because they are neighbourhood disputes arising under the common law of nuisance:

Disputes about development applications and s 60 notices are dealt with in the Environment, Resources and Development Court. While initial advice may be obtained from the Legal Services Commission or Community Legal Services, you may need to see a private lawyer about such matters.

The role of councils

The role of councils in relation to retaining walls is:

Retaining Walls  :  Last Revised: Fri Jul 6th 2018
The content of the Law Handbook is made available as a public service for information purposes only and should not be relied upon as a substitute for legal advice. See Disclaimer for details. For free and confidential legal advice in South Australia call 1300 366 424.